A Garland for Ashes It is raining on  Monday May 3rd 2010 and together with nine others, a minyan for prayer according to Jewish custom, we say Kaddish for my parents at the site of the burning of their bodies, the incinerator, in the Rzuchowski Forest, Poland, on the anniversary of their death.

Verena  is one of the 10. Verena has travelled from her home in Austria. Her father had been a gate opener for Hitler’s Anschluss, his annexation of Austria, March15, 1938.

Jutta, from Germany says, God weeps, as we stand under the gently falling water and receive His Healing Grace, Verena and I, wounded children of the Shoah. Kaddish at the incinerator | Photo by Ryan Thurman

The bright October sun shines through the trees in the Judische Friedhof, Gemünd and falls on Verena and I as we sit together, and spontaneously reminisce even as the cameras stare and our words are recorded. My story, my family story intertwined with Verena’s story, her father’s story, is being filmed. 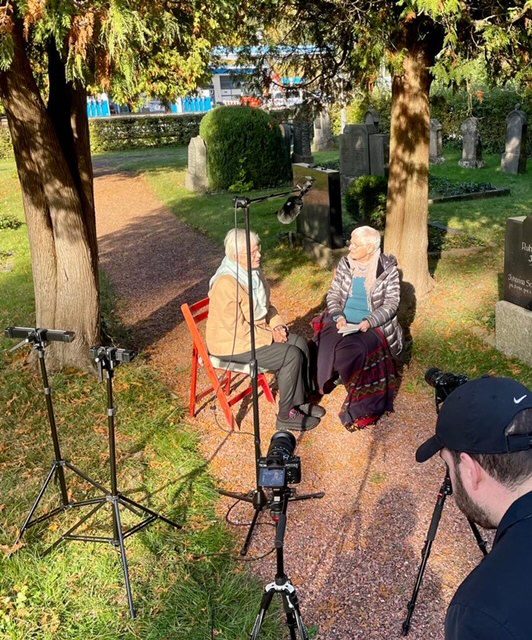 Together again | Photo by Ryan Thurman

Again as filming ends it is raining and we are in a forest distant from human habitation.

We walk on slippery, wet leaves among old gravestones and stop at the smooth, double  stone and read in silence:

This time the gravestone is placed over real bodies, they both died of natural causes before the Final Solution.

According to Jewish custom we place small, remembrance stones on the black marble. Buy A Garland For Ashes on Amazon