A Tale of Three Synagogue “Yad”, pointer for reading the Torah in the synagogue | A gift from Detlef Wurst | Origin: Poland

October 2 – 16, 2022  a team is filming the German part of my story, each day we are surprised by  unexpected encounters with people  and places.

Sorting through my memories from those two weeks, looking at our photographs, seeking themes, I stop and think about the 3 synagogues featured in my early German years.

My mother, Amalie Schneider called Heddesheim home. My grandfather, August Schneider, a wine merchant and president of the small synagogue was there in September 1910, at the dedication of the newly built synagogue.

Twenty eight years later on Kristallnacht, November 9-10, 1938 the interior of the synagogue was wrecked and plundered and the small community of Jews expelled.

October 4, 2022 the door is unlocked and we are warmly welcomed into the synagogue by local citizens who have taken on the challenge of turning the remaining modest structure into a memorial. The synagogue restoration group arrange a public reading of A Garland for Ashes (Meine Krone in her Asche) and ask me to talk about my family’s connection to Guldental.

How should I end my reading?  Our extended question time has revealed how deeply the audience has entered into my family story the history of their community, their country.

I am prompted to close with words from the Torah:

The Lord bless you and keep you;

The Lord make His face to shine upon you and be gracious to you;

The Lord lift up His countenance upon you and We mingle, I meet a politician, born in the area, a member of the Bundestag, who is attending with a colleague from the opposing party and we discover our shared desires for the healing of the past.

And then an 11 year old boy comes toward me with his mother, bringing a question, “What would you say to my generation?”

Surely we are experiencing that ancient prayer  being answered!

This is the synagogue  I remember the best.

From 1932 – 1938 Gemünd was my home and I still have vivid memories of sitting beside my father in the front row of the synagogue, watching the “Yad” the pointer in the hand of the reader moving slowly from left to right along the Torah scroll.

And yet, the Gemünd synagogue  is the one that has almost vanished. After Kristallnacht only a pile of smoldering rubble remained.

Today a small, nondescript workshop sits in the cleared. empty space on Mühlengasse.If you climb the crumbling old steps next to the workshop, turn and look carefully through the weeds at the back of the building, you can still see a layer of worn stones that were the foundation of our synagogue.

In the last years Kristallnacht has been remembered all over Germany by solemn ceremonies at memorials.

We were there for such a ceremony in Gemünd on November 9, 2014.

On that cold, damp evening Bürgermeister Udo Meister reads a  document describing the dark history of Gemünd’s synagogue and the public reckoning in recent years, lit by his wife’s cell phone.

He removes a red cloth, a plaque honoring the former Jewish citizens in words and pictures is revealed. The plaque is held high by two metal rods standing prominently at the head of Mühlegasse, a busy crossroads. Seven years later, in June 2021 Gemünd like many small Eifel towns was inundated by a disastrous flood. Gemünd sits at the confluence of 2 rivers. Homes, businesses and people were swept away.

Much of the rubble and debris has been cleared by the time we arrive to film in October 2022 but in the center of town shops, restaurants and homes remain stripped and closed and some of the local people we meet are still in shock.

I stand at the crossroads. Where is the synagogue memorial? I see the empty rods that had framed the plaque, standing firm, upright and empty. The plaque has vanished, swept away by the fierce, rushing waters.

The latest chapter in the turbulent history of the Eifel, of Gemünd… 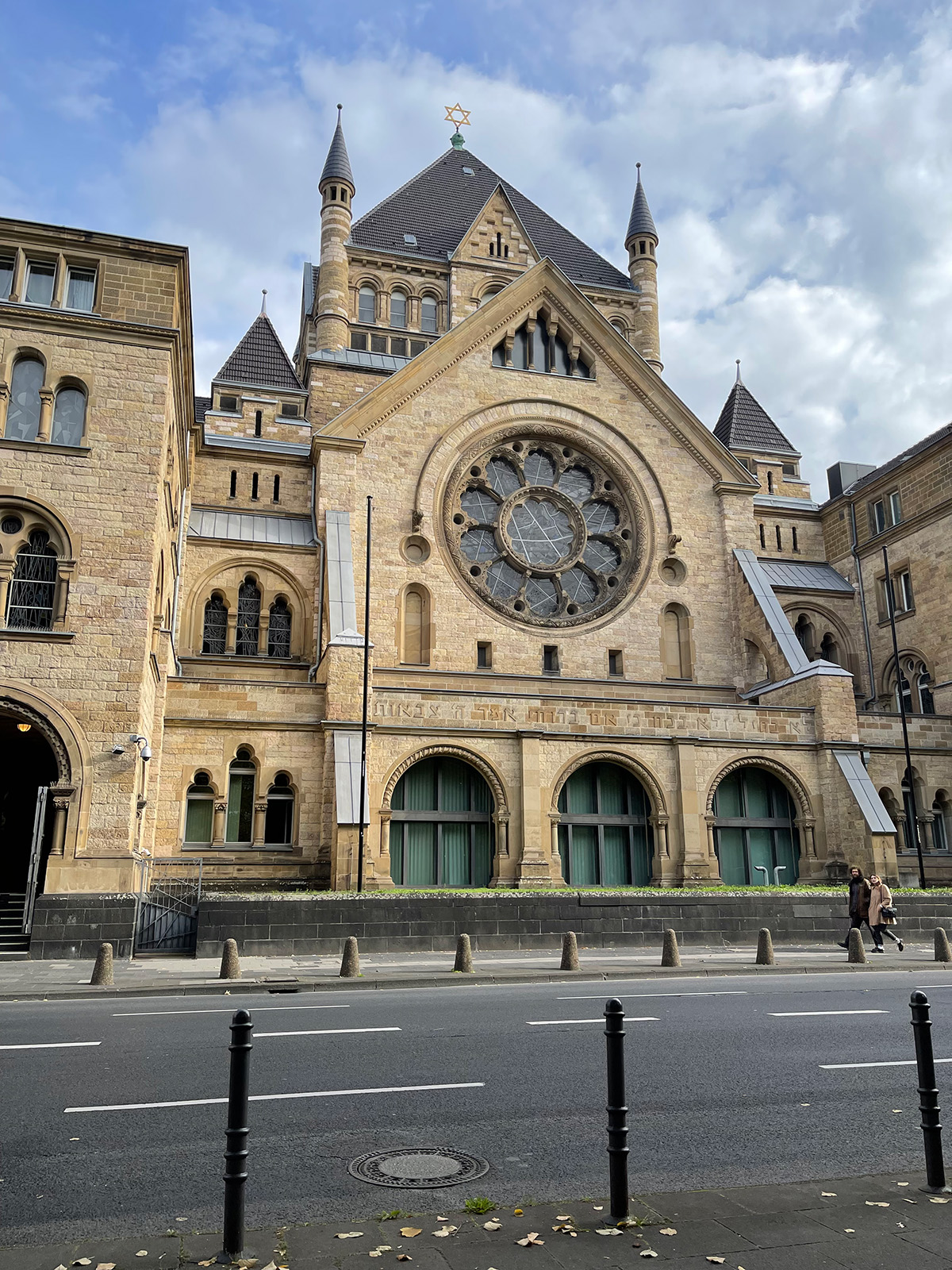 I have no memory of the enormous pile of rubble across the street from our apartment  when I lived there with my parents from December 1938 to July 1939.

Until Kristallnacht, November 9-10, 1938 those broken stones had been the imposing Roonstrasse Synagogue.

Back in Köln last October as we filmed, I turn away from the mundane, green apartment building that had once been an elegant structure where my family had sought refuge. I look beyond the island of trees to a restored synagogue, dominating Rathenauplatz.

I suddenly realize that every time our little family  stepped outside in 1939, we would have been confronted with the aftermath of the recent violent attack destroying the symbol of our identity. Did fear block out all visual memory of that arresting sight?

We film Julian whose father, like me, had escaped via the Kindertransport. His grandparents and my parents were on the same deportation train that carried all four to their deaths in Poland. We discover that our families had lived across the street from each other.

Julian and I enter the synagogue with the film team. We stand close together in the narrow entry way while our papers are carefully checked against information we had supplied earlier. The equipment is unpacked and scanned. Threats are real and caution is warranted.

In a strange juxtaposition of history Julian is filmed recounting his family story in a quiet room inside the synagogue.

Julian, Victoria, George and I with three Holocaust historians eat a kosher lunch together in the empty synagogue restaurant. Rathenauplatz, Köln | We meet in person for the first time, Julian and I What is it like to be a member of the thriving Orthodox congregation today, meeting cautiously in the only Köln synagogue that survived the Shoah?

Three synagogues, stories from the past,

present happenings and an unknown future…