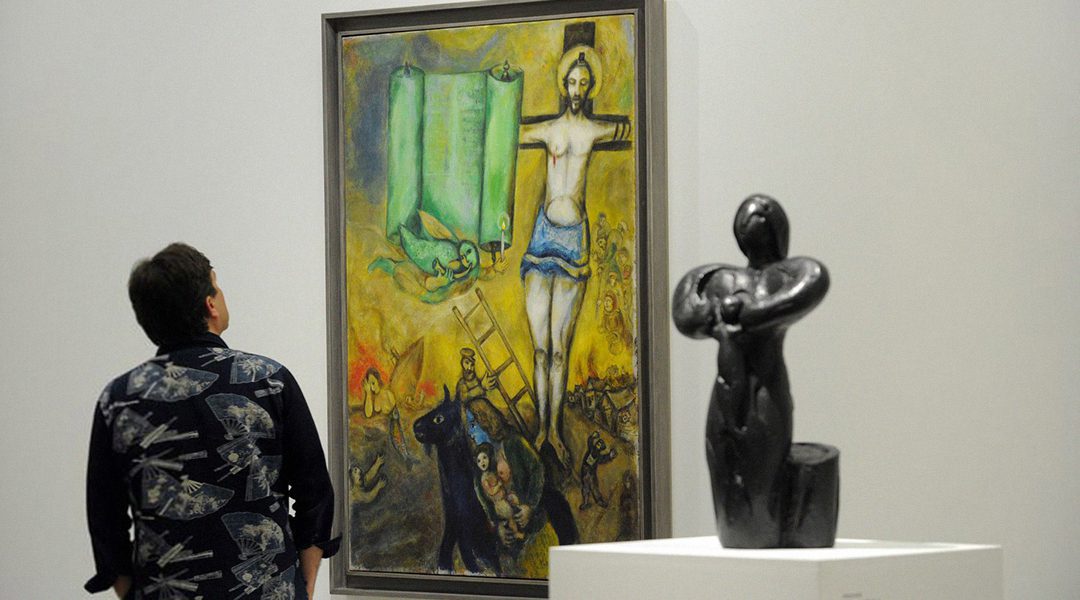 Marc Chagall’s fascination with Jesus and the Cross intrigues me. After all he was a shtetl Jew, born in Vitebsk, Belarus.

He painted the crucifixion again and again, intertwining the event in Jerusalem with Jewish history, past and present, selecting many colors…. white, yellow, blue, green, red….

Why did Marc Chagall, famous artist, persecuted Jew, paint so many crucifixions?

Last Sunday I happened to read a blog posted on artway.eu written by D L Jeffrey, titled Jacques and Raïssa Maritain among the Artists and discovered a clue to my question.

Both Jacques and Raïssa Maritain were noted philosophers in the early 20th Century. They were  friends of important artists  in a time of despair & nihilism. The two had made a suicide pact but at the last minute “they recovered faith in a transcendent being”.

Chagall was befriended by the Maritains when he came as a refugee to Paris. “The Yellow Crucifixion” by Mark Chagall Raïssa was born into a similar Hasidic Jewish community from the same area as Chagall. The Maritains encouraged him and influenced his reading of the New Testament.

In 1943 Raïssa wrote in her book titled, Marc Chagall,

“The tender spiritual joy that permeates his work

was born with him in Vitebsk,

It is thus penetrated with melancholy,

pierced by the sting of nostalgia and